How many Christians are there in Vietnam?

There are 8.7 million Christians in Vietnam, which is about nine per cent of the population of 97.4 million.

Why are Christians persecuted in Vietnam?

The Communist government in Vietnam exercises a high level of pressure on Christians in the country, particularly those who aren’t Roman Catholics. A 2018 law that looked, on paper, like it could lead to an improvement in the freedom of religion has not had any substantial effect. There have also been tighter restrictions on online communication, limiting a space where Christians could have found fellowship.

“Without the project, we didn’t know how we could earn a living. I ask God to bless the donors and sponsors of this cow bank project.” Mai, Vietnam

Believers from ethnic minority groups face the greatest persecution, which includes harassment, violent attacks and social exclusion. Villagers collude with local Communist authorities, beating believers, kicking them out of their villages and stoning places of worship during meetings. Mai, whose background is the indigenous Hmong religion, knows this first-hand. When she heard about Jesus and become a Christian, her husband Canh* had already died in a freak accident. Her late husband’s family were furious that she’d converted, because it meant she would no longer perform Hmong rituals for the deceased.

“They persecuted me greatly,” she says. “They tried to prevent me from going to church and believing in Christ.” They even threatened Mai with arrest. “I didn’t listen to them. I never quit.”

Thankfully, with your support, Open Doors local partners could help Mai with a cow bank. They give a pregnant cow to a family, who keep the mother cow for farming or breeding while the calf is given away to others in need. The aid allows persecuted, vulnerable Christians to live independent lives and continue to witness.

In 2020, like other countries during the coronavirus pandemic, some Christians in Vietnam have been denied official food and aid when it’s distributed. A number of families from a district of northern Vietnam reported being turned down point blank when they asked for food. They were told, “You are Christians and your God will take care of your family! The government is not responsible for your families!" In response, Open Doors partners delivered vital aid to 18 families. 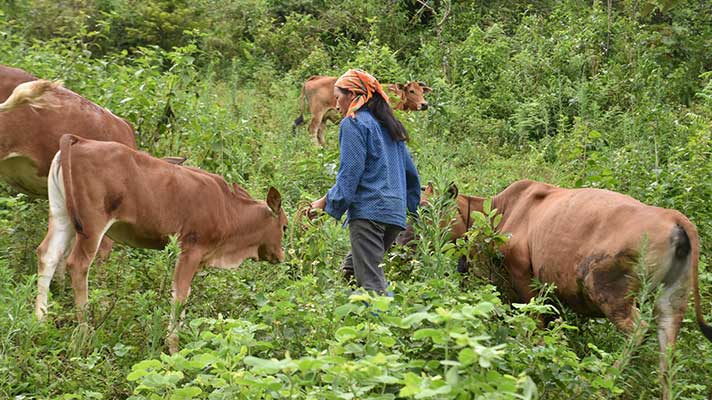 Mai and her cows

How can I help Christians in Vietnam

Please keep praying for your brothers and sisters in Vietnam. Your gifts and prayers make an enormous difference to those following Jesus no matter the cost.

As well as socio-economic projects like the cow bank, Open Doors supports the persecuted church in Vietnam through Bible training and discipleship, equipping and training believers, providing Bibles for adults and children (including in tribal languages) and advocacy. Since the vast majority of Christians in Vietnam belong to ethnic minorities from the North and Central Highlands, they are the focus of Open Doors’ work.

Lord God, please strengthen and encourage believers in Vietnam, particularly those from ethnic minorities like the Hmong. May they find their ultimate identity in You, and have opportunities to share the gospel with family and neighbours. Thank You that Mai’s family finally chose to follow You too, and thank You for Mai’s courageous witness to them. Amen.